On April 25, 2015, a 7.8 magnitude earthquake struck Nepal. The initial earthquake was followed by many aftershocks, including one with a magnitude of 7.3 on May 12, 2015. The initial shock and aftershock caused severe damage in 31 of 75 districts in Nepal. Among the affected districts, 14 in the central and western regions with a total population of 5.4 million were most severely affected.

The overall damage in all the affected districts include 8,790 deaths and over 22,300 injured. Nearly 500,000 houses were destroyed and 250,000 damaged. Other losses include collapses or damage of government buildings, health facilities, schools, and heritage sites. The earthquake affected eight million of the country’s total population of 26 million.

The total value of disaster effects, including direct damage and indirect losses, is estimated at Nrs. 706 billion. The most affected sector, housing and settlements, sustained about 50 per cent of the total destruction; followed by production decline at about 25 per cent and tourism at 11 per cent.

Rural households in affected districts suffered not only physical damage like collapsed houses, but also damage on their farmland and livestock. As rural households depend on farming and livestock as their main income sources, the earthquake’s damage had considerable impact on their income-generating capacity. The total damage for all affected districts for crops, livestock and irrigation was estimated at Nrs. 28.3 billion, according to the National Planning Commission (2015).

The project was initiated on January 8, 2016. The main objectives of the project were to provide quick financial assistance to affected households to 1) revive microenterprises, 2) restore livestock, agricultural and other livelihood activities, and 3) cover essential expenses during the rehabilitation period.

A survey was conducted on 700 beneficiaries selected from 15,7000 livelihood restoration microcredit borrowers. The sampling tried to ensure the proportional representation of borrowers by ethnicity, gender and borrowers’ types of income-generating activities.

The survey also included 175 households who are non-Small Farmers  Agriculture Cooperatives Ltd. (SFACLs) members and non-beneficiaries, who were equally affected by the earthquake. The survey was conducted in eight SFACLs, five of which were in Dhading District, two in Nuwakot, and one in Rasuwa. By gender, 66 per cent were female and 34 per cent were male.

The affected households mobilized resources from various  sources, such as their own savings, loans from formal financial institutions, loans from friends and relatives, and grants from governments and NGOs. The surveyed beneficiaries received an average of Nrs. 103,000, while non-beneficiaries secured an average of Nrs. 71,000. The difference  is largely due to the ability of SFACLs to give greater financial access to the households most affected by the 2015 earthquakes. 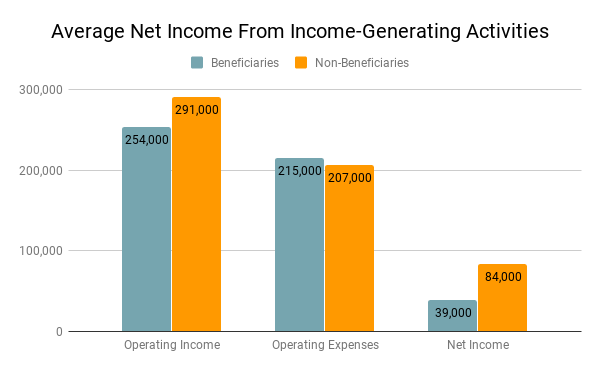 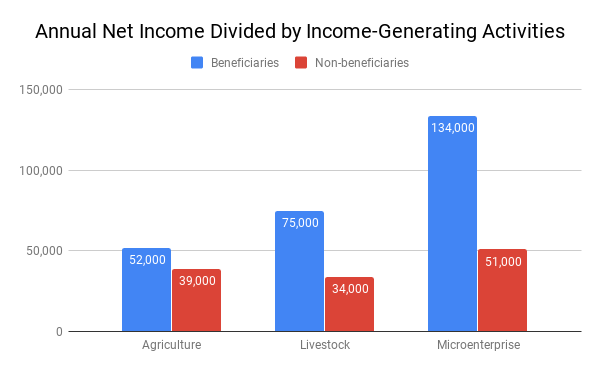