One Man Brings Agricultural Entrepreneurship To The Mountains

Navin Joshi was born in Achham, the far western mountain district of Nepal. From the time he first became a student, he was very studious. Having completed school level with excellent grades, he began a degree in both science and management, completing both successfully. After that, he got a diploma in computer hardware and networking, while working in Mumbai for several months. Upon returning, he came with the vision of transforming Nepal’s agriculture sector. 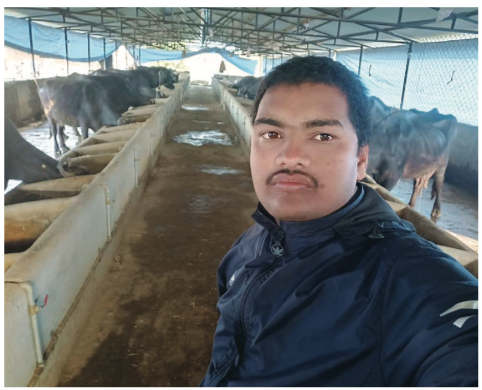 Going back generations, Mr. Joshi’s family has always been engaged in agriculture. Buffalos had been providing the family milk for decades, though not on a commercial scale. Mr. Joshi encouraged his family. To start selling the milk from buffaloes, and soon they were putting two to four litres on the market every day.

It was then that they moved to Kailali in the Terai reigion, which made life more difficult. Mr. Joshis dream had always been to establish himself, along with his family, in an agricultural enterprise that would be lucrative. To start, he registered his farm with the name Tripura Sundari Agriculture farm. However, it was difficult with no other income to get the ball rolling and start making profits quickly. So, he went to various financial institutions, but no one accepted his proposal. He was rejected everywhere.

But he didn’t lose hope. He kept looking and stumbled upon the Israel-Agro program, established by Sana Kisan Bikas Bank Ltd. (SKBBL) and the Nepal-based Israeli Embassy. He applied for the program and was selected as one of the 444 candidates in 2016. In the 11 months that he stayed in Israel, he earned Nrs. 1.5 million.

This was a turning point in his life. After returning to Nepal, he got a loan of Npr. one million from his cooperative. With this money, he built a shed for buffalo farming, began a vegetable farm with the purpose of selling the produce, and built a modern greenhouse.

For all his hard work, the Nepali government rewarded him with Nrs. 2.1 million. Today, he provides direct employment to ten people and indirect employment to 100. His yearly net income has grown too Nrs. 3.5 million. Mr. Joshi acknowledges that, without SKBBL and their support, he would not have been as successful as he is today. He would not know that thousands of Nepali youth will follow in his footsteps by participating in the program and succeed in ways they never thought possible. Mr. Joshi has become a role model for youth dedicated to become successful entrepreneurs in the agriculture sector, just like him.