Yuddha Neupane lives with his family in Dhunibesi-5, located in Nepal’s Dhading District. There, they grow wheat, paddy and maize for sustenance and tomatoes and other vegetables to be sold in the local market. Their primary occupation is agriculture. 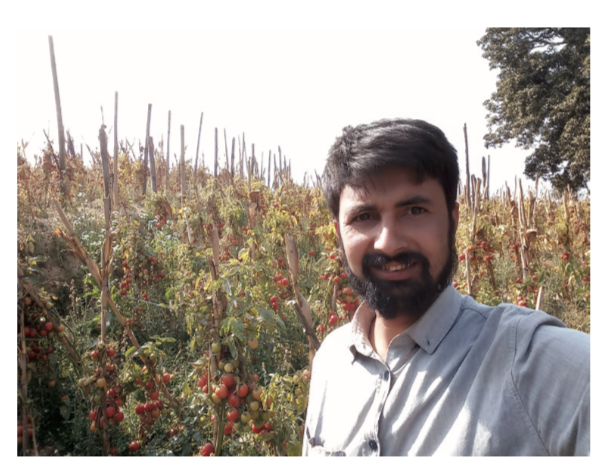 Between 2013 and 2014, Mr. neupane participated in the 11-month Small Farmer Agriculture Training Program at Arava International Center for Agriculture Training (AICAT), which was initiated through a joint partnership between Sana Kisan Bikas Laghubitta Bittiyasanstha Ltd. (SKBBL) and the Nepal-based Israeli Embassy.

Mr. Neupane was among the first to participate in the program, which started in 2013.

From Subsistence to Commercial Farming

When Mr. Neupane first saw fresh vegetables and fruits growing in the scorching heat and sandy soil, he could not believe his eyes. He realized that nothing is impossible. Gradually, he learned through the Learn and Earn Programme in Israel about drip irrigation and pesticide management, as well as modern agricultural techniques.

Seeing the farming practices evolve first-hand in Israel motivated Mr. Neupane to start focusing on commercializing produce on his own farm in Nepal. His family already owned 1.32 hectares of land so, after coming back home, he decided to put his newly acquired skills into action. He built a greenhouse on 0.4 hectares of land, installed a drip irrigation system for vegetable farming, and constructed a shed for goats.

Since his home in Dhading District is not too far from Kathmandu, just 30 km away from Kalimati vegetable market, the demand for vegetables is not lacking. A market to sell his vegetables at is, thus, not one of the challenges he has to face.

From his earnings participating in the program, and vegetable and goat farming, Mr. Neupane has been able to purchase an additional 1.22 hectares of land to expand the farm. On his supplementary land, he has built more greenhouses and sheds to maximize vegetable production and expand the drip irrigation system.

Mr. Neupane’s yearly net income is now Npr. three million. His farm has provided full employment to his family and other villagers. Even youth who return from the Gulf countries and Malaysia visit his farm in search of greater knowledge of vegetable and goat farming. He has become a role model for youth in his community and says he is happy with the progress he has made. He plans to continue entrepreneurial activities in agriculture and inspire other youth to do the same.